Waste as nuisance on a street in Takoradi

Waste to treasure – lessons from afar

Ghana, like most countries is at the crossroads, overwhelmed by the ever-increasing waste.

The development has become a huge social problem even though the same waste can be a source of job and wealth creation.

One of the key lessons I picked on a recent Petroleum Commission Oil and Gas Trade Mission to Scotland in the United Kingdom is how waste has become one of its export commodities. 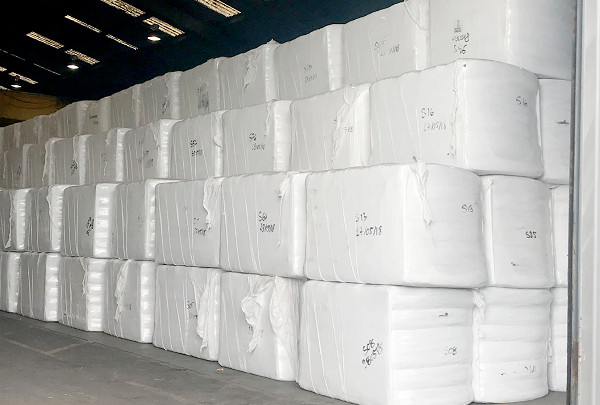 Package waste in Scotland as a resource ready for export

At one of the terminals at the Port of Dundee, well-packaged jumbo bales of waste, which were ready for export caught my attention.

During a tour of the port facility, the authorities took me through the kind of waste they handle at the port , which ranged from the offshore hazardous and non-hazardous materials from the upstream operations to commercial, industrial, agricultural, domestic, and e-waste, among others.

They explained that more than 10 million tonnes of packaged waste are produced every year in the United Kingdom.

Again, reports indicated that, although almost two-thirds of packaged waste was recoverable, a significant amount still ended up in landfill sites hence the need to curb it.

In Scotland, there is a conscious effort to reduce the environmental impact of waste. The government has set itself the task to attain a zero waste country in less than two years under the Zero Waste Plan.

At the port of Dundee, the Port Operations Manager, Mr Mark Gaffney, said in Dundee, they no longer saw waste as a nuisance but rather as wealth and energy.

He explained that when these countries imported the waste, they were fed into special incinerators which turned them into electricity. “Therefore we have much less or no waste going to landfills at every particular moment,” he said.

At the 2015 annual New Year School in Accra, Prof. Ernest Yanful of the Africa Institute of Sanitation and Waste Management of the Kwame Nkrumah University of Science and Technology (KNUST) said the country was inching towards generating 25,000 tonnes of waste daily.

His calculation was based on the average production of one kilogram of solid waste per person daily and culminating in over nine million tonnes of waste a year in Ghana.

In UK, the waste is segregated into plastic, metal, tin, domestic waste; sludge, wooden, paper and other forms, and are placed in their respective bins.
If Ghana’s nine million tonnes of waste generated annually is segregated, it will mean that the country can access those countries in Europe, which mainly import waste from other countries.

Sweden was recently reported to have run out of garbage, forcing the country to import from neighbours, where almost a million homes are heated by waste incineration.
While Ghana is being swallowed by waste, in Sweden, their landfills have been tapped dry; the rubbish reserves depleted.

The question is, with the estimated millions of tonnes of waste generated in Ghana, is waste to energy technology difficult for the country’s universities to develop?

Again, there are by-laws in the district assemblies with sanctions for polluters — companies, domestic, and industrial waste.

In the twin-city of Sekondi/Takoradi is a huge market surrounded by residential facilities without communal containers or waste bins in their homes. The Zoomlion containers for the market women became a place for dumping their waste for free under the cover of darkness.

At SEPA, they are of the view that to achieve the vision of zero waste means radical new measures, including the development of a Waste Prevention Programme for all waste and ensuring the prevention and reuse of waste is central to all actions and policies.

The recent call for a ban on plastics in Ghana was met with fierce resistance. Elsewhere, in UK, there is a landfill ban for specific waste types thereby, reducing greenhouse gas emissions and capturing the value from these resources. It is important for the local authorities in Ghana to look at the enforcement of the by-laws.

The hospitality industry in Ghana for instance, generate a lot of plastics, which are not properly disposed of.

In Ghana, oil discovery and mining came with their own wastes classified into hazardous and non-hazardous.The situation in UK is comparable to what pertains at the integrated waste management station at Nyankrom operated by Zeal Environmental Technologies, an indigenous Ghanaian company.

Clearly, if we want to be serious about our waste system, we need to enforce the laws, ban the plastic or encourage responsible plastic use, let people pay extra money for use of plastic of all forms. There lies our redemption.