The country’s religious and cultural commission said the schools in different areas of the Eastern Cape would be suspended for a year.

It called for the arrest of those responsible for at least 20 deaths.

The initiation into manhood involves spending weeks in mountainous areas in harsh conditions.

Why do people get circumcised?

Every year, tens of thousands of initiates aged between 15 and 17 spend time in seclusion in the bush where they are taught about how to be upstanding men in society.

But exactly what happens there is kept a secret.

Ukwaluka, or traditional initiation, is seen as a necessary part of the passage from boyhood to manhood by some of the country’s largest ethnic groups, including the Xhosa and Ndebele. 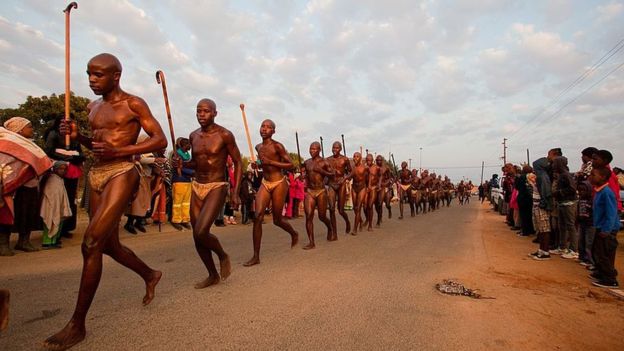 For many who practise the ritual, the homecoming is a time of celebration, where a feast is prepared for the family and community to enjoy. It is a celebration of the young men’s safe return and more importantly their new adult status.

But sometimes things go terribly wrong, with some initiates dying or left disfigured from a botched circumcision.

Hundreds of boys were taken to hospital last year where they were treated for penile amputation, septic wounds and dehydration.

Why is there a ‘circumcision season’ and what happens?

This is when most boys are home from school and have time to complete the rituals, which can last up to a month.

When young Xhosa boys are aged between 15 and 17, their families prepare to take them to an initiation school – where they will be under the care of an “ingcibi”, a traditional surgeon, and an “ikhankatha”, a traditional nurse.

2019-12-20
Latifa Carlos
Previous: Trump to give annual address to Congress amid impeachment drama
Next: One year on, Amnesty urges Sudan deliver on protesters’ demands