Three separate swoops by the Pokuase District Police have resulted in the arrest of 30 suspected robbers, made up of five women and 25 Nigerians.

Those arrested were between the ages of 18 and 34, and the police found suspected narcotics, a suspected stolen car, as well as items believed to be used for their robbery operations.

During the intelligence-led operations which took place at about 8:30 a.m. last Sunday, the police besieged suspected criminal hideouts within their jurisdiction and apprehended the suspicious persons.

Briefing the Daily Graphic, the Amasaman Divisional Police Commander, Chief Superintendent of Police Mr Francis Yiribaare, said the operation was part of the division’s ongoing measures to address concerns over the gradual re-emergence of violent crime in the area.

In one of the hideouts, 19 Nigerians, all males, who took cover in the ceiling of a house and locked up the rooms, were arrested.

When the police visited a second hideout, six more male Nigerians who had also locked themselves up in their rooms were arrested.

In the third location, five persons, comprising three Ghanaian men, one Ghanaian woman and one Liberian woman, were arrested.

A search conducted in the hideouts led to the retrieval of an unspecified number of tramadol capsules and tablets, five packs of suspected Indian Hemp, some liquid concoction suspected to be Indian Hemp bitters and Shisha pipe with four and half packs of flavour. 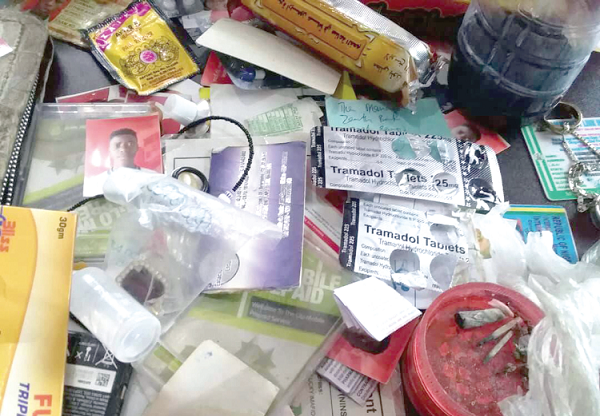 Some items the police suspect the robbers use in their robbery operations which were found during the swoop included packs of razor blades, five screw drivers and a hammer.

Mr Yiribaare said the suspects were in the custody of the Pokuase police pending further investigation into their suspected involvement in armed robberies and land violence.

He urged victims of robberies living within Amasaman, Pokuase and their environs to contact the police to assist with the identification of their stolen items and the suspected robbers, as well as investigations.

2018-06-01
Latifa Carlos
Previous: Why Ghanaians Are So Slow To Bury Their Dead – BBC
Next: Cashew Processing in Africa will Reduce Poverty – Experts