As Ghana hosts the greatest return initiative for Africa, there is a lot to appreciate of those who have taken the decision to return permanently; to abandon the comforts of a western society and move to settle with whatever is left of the cradle of civilization.

Although some may have awoken from the “American dream” with a slap of reality — racism — to found peace and acceptance at home; it was not entirely a walk in a park for everyone.

Some gave up and left Africa minutes after the fanfare tunes of “Akwaaba” faded away. But that cannot be said of Odehyee Nana Kwame Ofori Atta.

This is a citation of sorts for a man — a returnee — from the diaspora 20 years ago, who was made king by his people. By all standards a brave man who inherited a kingdom in need of transformation. At the passing of the then king, Osagyefuo Kuntunkununku II, Nana Kwame returned to Kyebi, the ancient capital of Akyem Abuakwa in Ghana for one reason alone; to plan a befitting burial for his late brother.

Osagyefuo Kuntunkununku was king for only 23 years (August 2, 1976 to March 17, 1999) after inheriting the Ofori Panin stool (throne) from their uncle, Osagyefuo Nana Ofori Atta III. The sad demise of this middle-aged monarch invited many Akyem people from the diaspora, a majority of whom had travelled abroad in the late 1970s and early 1980s to pursue education and/or work.

As the 14th century-aged customs of the Ofori Panin stool demands, there was the need for a new king to be enstooled. Only then would the final funeral rites of the predecessor be performed.

The burial rites were a week-long. All roads led to Kyebi. Everyone was there to pay their last respects to the king. Shortly after the burial, a request was sent immediately to the royal families to nominate a candidate each for the role of king. They were to be presented to the “King Makers” for the meritorious selection of an heir apparent. This is the first stage of the enstoolment process.

For Odehyee Nana Kwame Ofori Atta, an insurance broker from North Brunswick, New Jersey, USA, it was a call of duty that dawned upon him first when he was nominated by his family. He had had no intentions to stay past his brother’s burial, nor had he planned to remain in Ghana to rule a kingdom, for that matter.

His mother, Odehyee Abena Akoto, was the lineage to royalty, considering that the Akyem Abuakwa kingdom is predominately a matrilineal society where inheritance is passed through the mother’s line. The family fielded Nana Kwame as their candidate for selection by the “King Makers”. Seeking his consent was never a part of the discourse.

At this stage, nothing else mattered except honour to his bloodline and duty to the kingdom. He was to give up his career, his family life, the home they had made, personal liberties and his individuality to serve his people as their leader. Even his name, Nana Kwame Ofori Atta, would be given up for an inherited stool name or new one as it turned out. 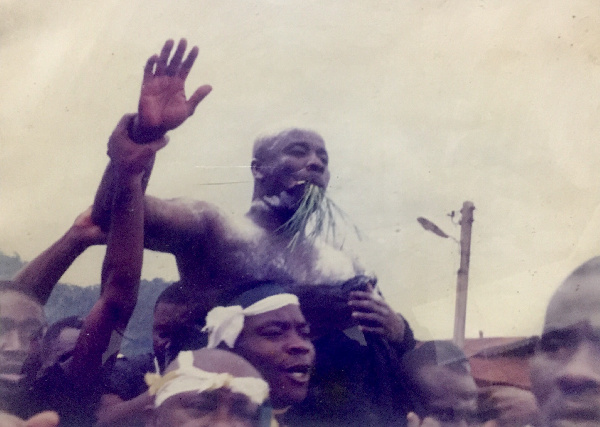 To make the duty more challenging, he was to learn on the job. And he was not to disappoint his extended royal family.

He was enstooled as the 35th Okyenhene (King of the Akyem Abuakwa kingdom) on 4th October, 1999 and named Osagyefuo (redeemer) Amoatia Ofori Panin, first of his name. He embraced the task ahead with no hope for easy success. Only duty. At the time, the kingdom’s slogan, “y?n nhw? ma ?ns?i” (we shall not look on for it to go to ruin) sparked only ridicule. Even some Akyem people responded to the slogan with “?nso na as?i” (and yet it is ruined). To understand the problem, as ancient wisdom assures that is part of the solution, Osagyefuo decided to tour the kingdom.

Thus, was recorded the first tour by new king only months after his enstoolment, visiting about 900 towns and villages in six weeks, interacting with the chiefs and people, and gaining their support for the task ahead.

A baseline was realised. He decided to chart a new course in environmental conservation, considering that there was then a subsiding fate to the unique features of the kingdom, which is its rich forests, with the famous Atewa Forest Reserve in the heart of it. Soon enough, he was a renowned environmentalist, speaking at conferences across the country and the globe. Coincidentally, one of his inherited titles was “Kwa?bibiremhene” (King of the rich dense forest).

Osagyefuo established a non-governmental/not-for-profit organisation called the Okyeman Environment Foundation (OEF) in just a year, and appointed an environment chief to be responsible for the conservation efforts throughout the kingdom.

On the occasion of his 10th anniversary as king, he would also inaugurate the University College of Agriculture and Environmental Studies (UCAES) to promote the study of agriculture and environmental sciences throughout the country.

His strides in conservation and environmental protection caught the attention of other influential advocates who upheld the same vision. Among heads of states who were nominated by the Prince of Wales, Prince Charles, to form the African Advisory Council for the Prince’s Rainforest Project (PRP), the Okyenhene, Osagyefuo Amoatia Ofori Panin was the only traditional leader, and handpicked by the Prince himself.

Mohammed El-Ashry, head of the Global Environment Facility (GEF), also took keen interest in the king’s efforts to protect the Atewa Forest Reserve from illegal lumbering and poaching activities. The GEF, after conducting months of studies on the Reserve, awarded a grant facility to the OEF to undertake an alternative livelihood project in conjunction with local government and community leaders.

Two years into his reign, one of his friends in USA reached out to him with an idea. It was Paxton Baker, a young man he had met on a plane and became friends with because of the encouragement and motivation he gave him. He later became the Executive Vice President for BET Jazz Digital Networks and President of BET Event Productions (Washington, USA). Pax, as he called him, proposed an event dubbed “Ghana Jazz and Heritage Festival” to be held in Ghana at the Cape Coast Castle during Black History Month. It was unique and the first of its kind this side of the Atlantic. Foreign jazz musicians, including Freddie Jackson, Marcus Johnson, Mike Philips, Angela Bofill and Sy Smith would all participate, and the festival would see hundreds of people throng from all over the world to participate.

An Afro-American jazz festival in a castle that was built by Europeans and later used for slave trading caught a lot of attention. The goal was that it would serve as a celebration of freedom in the same place that thousands of Africans were enslaved. Part of the proceeds from the concert went to support HIV/AIDS awareness creation and the maintenance of the Cape Coast castle as a historic tourism site.

This, in turn, started a whole new programme; the Okyeman HIV/AIDS Foundation. First, the king ran in a marathon defying ancient customs where he is not to be seen breaking a sweat in public. It started a nationwide dialogue on the subject of HIV and AIDS that would not too soon subside.

The king also tested publicly for HIV, yet again defying ancient tradition that disallowed him to expose his blood or have any part of his body punctured. This single act motivated thousands of people to get tested to know statuses and receive the necessary help needed through counseling and healthcare.

This gave birth to an annual commemoration of World AIDS Day with a week-long schedule of activities, culminating in the marathon and health fair.

In October this year, as he marked 20 years of his reign, he went on another tour around his kingdom to reaffirm the baseline. The theme for the anniversary was “Serving the People; Innovating for the Future”. In 16 strategic locations, he met with his people from surrounding towns and villages to make an assessment of the effect of his reign on each of the communities he had visited in the year 2000. He traveled with a team of medical professionals to provide health screening for thousands of people at each location. In his interactions, he made a bold declaration to spearhead a tree-planting initiative to ensure 25 million trees are planted to mark his 25th anniversary in 2024. A great initiative with a crafty play on numbers: 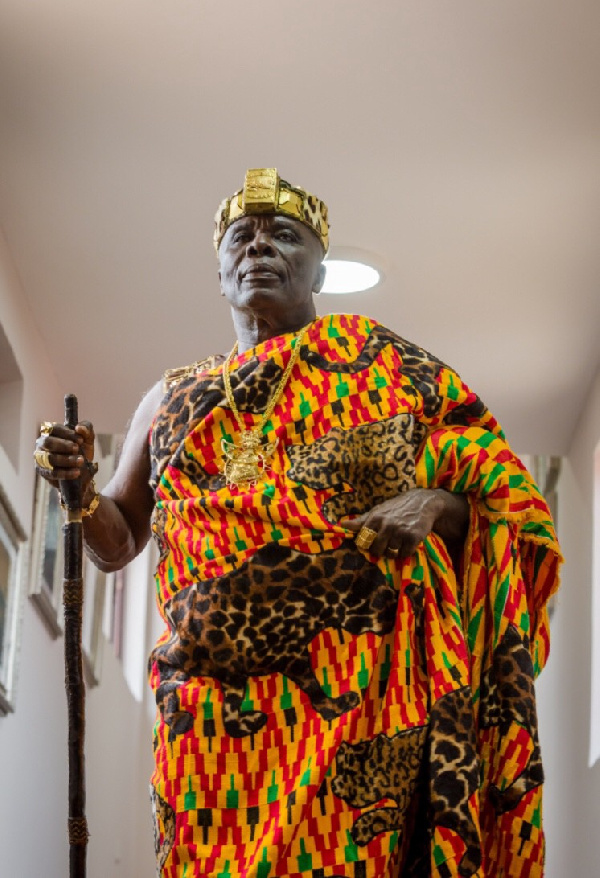 His chiefs and people embraced the idea and pledged their support. He also announced the building of 10 model basic schools across the kingdom under his fellowship and ideals, to be named the Amoatia Ofori Panin Basic Schools.

A lot can be said of him on the development programmes that he has initiated for his people in the past 2 decades, but what is most striking is his courage and tenacity to have endured his return to serve his people. He remains a fine example of a returnee who has “survived the climate” and never looked back. He fits for an icon for the Return and a mentor for our brothers and sisters who have decided to return home and settle and particularly those still considering the decision.

Ghana’s Year of Return has granted permanent citizenships to over 200 foreign nationals this year alone who have made their home in Ghana. The Ghana Embassy in the United States is rumoured to have issued over 750,000 visas this year alone. At the Grand Durbar to celebrate the 20th anniversary of the Okyenhene, Osagyefuo Amoatia Ofori Panin, the new Ghanaian citizens came in to pay homage to him as a starting point for learning and sharing experiences and helping to rebuild a new Africa. This Year of Return is the bridge to connect Africans in the diaspora with the motherland, as President Akufo Addo declares “Right of Abode” for all persons of African descent living in the diaspora.

Kofi Gyimah Amoako-Gyimah has worked for the Okyenhene since November 2004. He is the Projects Development Coordinator and also serves as Executive Secretary of the Okyeman Environment Foundation.

2019-12-27
Latifa Carlos
Previous: Lukaku: Ronaldo told me Italy is the hardest place to score
Next: Top African elections to watch and predictions for 2020